Farewell To A Dear Friend Who Was My Business Mentor

In 1981 I met Harry Eckstein after the IBM sales rep told me that she was trying to sell his company the IBM AS/400 server and the IBM MAPIC Manufacturing Software. At the meeting Harry asked her technical questions. When she could not answer them, he told her that she was wasting his time and not to come back unless she could bring someone with her who was able to answer his questions. When she spoke with her manager about this, he asked her to contact me saying that I was known in IBM circles as an expert who modified the MAPIC software. 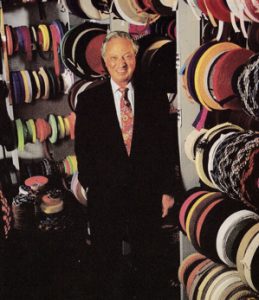 When we visited Harry, his opening statement was that he had wasted enough time with the IBM rep, who could not answer his questions, and unless I could, it would be a short meeting. Hearing this I told Harry that I had modified MAPIC and would be happy to answer his questions. For the next couple of hours Harry asked questions. Satisfied with my answers, he told me that he would buy the AS/400 and MAPIC, use my services, and expected me to get his company up and running in three months. If I did not, he would sue me. When I heard this, I told him that I work on a handshake, did not need a lawsuit and walked out of his office.

The rep, upset, asked me why I turned Harry down and said that sale of the AS/400 and MAPIC would have made her quota for the quarter. I explained to her that it was impossible to modify MAPIC to meet his requirements in three months and I did not need a lawsuit. At the time I had an answering service company that answered my home phone between 8am -5pm. At 6pm Harry called and Ellen, my wife, answered the phone. Surprised, Harry asked her who she was. When she answered, he told her that I am the hot-headed Israeli who walked out of his office and should visit him the next morning at 9 AM.

When I entered our apartment, Ellen asked me what happened. When I told her, she said that Harry sounded like a nice man and I should meet him. The next morning, sitting in his office, he told me that the day before we met, the IBM rep called him and said that I was well known in the industry as a MAPIC expert who could answer all his questions. Prior to the meeting he checked me out and found that I established my business the year before and the lawsuit was his test. If I did not care about the lawsuit, he would have not hired me since I could close my company and open a new one. The fact that I walked out proved to him that I had integrity. Next, he said that he knew it was impossible to do the modification he needed to MAPIC in the timetable he gave me and that was his second test.

This meeting resulted in a long friendship that lasted until 2019. Whenever I had difficulty meeting Friday’s payroll, I called Harry and he paid me in advance for future work to be done. Over the years Harry advanced me $30,000 when I had various business issues. Harry, who was twenty years older than me, was my friend, business mentor and trusted advisor. When we had dinner together, I discussed the issues I had with my ex-partner who felt the business was a source of income and did not have work hard, showing up at work at 11 AM and leaving at 5 PM. This resulted in our high-paid employees following in his footsteps. Having the amiable personality, I kept telling Harry that I cannot break the partnership with my ex-partner who lived above his means and had to lend him money to prevent his house from being foreclosed.

Every time we had our monthly dinner, I brought up the subject of my partner and my employees and being unable to do anything about it. Harry responded saying he couldn’t advise me what to do with my partner since guilt feelings have no logic but eventually, I will be forced to face my reality and do something about it. In reference to firing my employees, he agreed that it was a difficult task that must be done, saying that when he had to make the unpleasant decision of letting people go, he had a sleepless night.

Harry, who taught management at Colombia University and accounting in Brooklyn College, told me that when a B student got B+ he gave him A-, but when an A student got A-, he gave him B+. When I told him that most likely his students could not wait for the semester to end, he said that his students were happy to attend his class. When he saw that I doubted this, he told me that if he can drag his ass at night to teach after working a long day he expected his students to give him the best they could and his class was always full because his students told their friends he was a excellent teacher.

In 2001 we were working on a large warehouse automation project for Harry’s company when September/11 happened. In the morning he called me and said that his company had just lost 50% of its business and asked me to do him a favor and lower my daily fee until the warehouse project was finished. I told Harry the project was on time, will take $15,000 to finish and we will do it at no charge. When Harry heard this he said he did not understand what I was saying. I told him that he had been my friend, mentor, and trusted advisor for the past 20 years and never had an issue understanding my accent so why didn’t he understand me. Harry asked why I was doing it. I told him it was a late interest payment on the $30,000 he had advanced me over the years.

In his nineties, Harry could no longer have dinners with me saying he did not have the energy to go out. On April 20, 2019 I received the sad email from Martine, his daughter, that he had died. The next day I asked Amazon to mail Martine my autobiography describing my background as a self-made man, which includes a section about my relationship with Harry. I never got over the sadness of losing him as the friend who was kinder to me than my family. Remembering Harry, I do not forget where I came from and help people as much as I can.